In ruminating on what I wrote a few days ago, it occurred to me that instead of summarizing key points from the book, I will leave it up to you to read the book itself to gather these salient points. The book is expressly priced low to make it very available.

Meanwhile, I will be further reviewing the relevance of the Petkau Effect and the energetics of un-modified and un-pesticided foods, and then see about writing down some notes about that.

For the moment, the most helpful suggestion is to apply the fact that the energetics of clean and fresh food is of utmost importance when you are considering how to protect yourself from our polluted world. Food is our medicine; not a bunch of pills. Take into consideration the enormous value of a greenhouse with clean rich soil and filtered water; and also a shared garden with friends.  Until later with other details of interest.

The Myth of Allowable Levels

I would like to let you know that aside from the print version of "Radiation Protective  Foods " you can now get the book on digital readers -- iPad, Kindle and others, through www.authorhouse.com, Amazon and other sources for readers.

In considering what to cover in this and future blogs, it seems the most helpful contribution would be to review some of the key points made in the book.  So, I will start with the misleading concept that a little bit of radiation will not hurt you.  Then, we will go into a discussion of the broader view of radio-protective foods, and why selected foods are critical.

The Myth
A basic premise of the popular understanding of hazards inherent in nuclear power is the myth of allowable levels.  This implies that there is an amount of exposure which is safe for the public.

There is very little awareness of what low-level radiation is doing to our health.  In the early days of radiation research, scientific authorities assumed there was a dose of radiation which was "safe".   This assumption has since proven false.  Unfortunately,  the illusion of permissible risk is still with us.

The first recommendations were set for workers in 1925, even after it became apparent that unlimited exposure was indeed unsafe. The 1925 standards, set for x-rays and measured in roentgens (R), persisted through the 1940's.  In 1949, the measurement was changed to rems and was based on exposure from bomb development and nuclear power plants - and the allowable levels were reduced.  In 1958, they were reduced again.  Meanwhile, in 1952 a new standard was set for the "general public", and this level was also drastically cut in 1958.

In the mid-1960's,  the US Government acknowledged (at least in theory) that there was really no such thing as a "safe" level of radiation.  A 1966 report by the Atomic Energy Commission (AEC) stated: "There is no threshold in the genetic effect of radiation and ... there is no safe amount of radiation insofar as genetic effects are concerned.  However small the quantity of radiation absorbed, mankind must be prepared to pay the price.."  (The Genetic Effects of Radiation, 1966.)

In spite of this, the AEC went ahead and set "permissible" levels anyway -- without explicitly stating that even these levels of exposure would damage some of the population -- hoping that the benefits of the technology would outweigh the known risks. However, even these so-called permissible levels were to become woefully obsolete, though they are still the levels in use today.

In 1972, a researcher for the Canadian Atomic Energy Laboratories made a discovery that radically altered our knowledge about radiation and human health. While studying how chemicals cross cell membranes, Dr Abram Petkau was surprised to find that cell membranes broke much more easily than expected under certain circumstances. When radiation was given by an x-ray machine over the course of just several minutes, Petkau observed that it took a very large dose of 3,500 rads (approximately equal to 35,000 years of naturally occurring background radiation) to break the membranes.  But when he irradiated the cells slowly, over a longer time, he was shocked to find that the membrane would break at a total dose of LESS THAN ONE RAD.  After carefully varying the factors in his experiments, Petkau came to this conclusion: the longer the time of radiation exposure, the smaller the total dose needed to cause the damage.

This discovery, called  'The Petkau Effect',  effectively tossed all our previous assumptions  about 'permissible exposure levels" out the window.  It showed that the amounts of radiation that are legally released from nuclear energy plants - let alone from spills, leaks and accidents - could already be doing considerable damage to our health. There is a great deal of data confirming this and in fact, this is happening.

Yet, today, about 40 years later, neither Petkau's discovery, nor the body of research confirming it, are widely known; and we still have 'permissible levels' of radiation release.

Now for the good news.  How much of this biological damage happens to you and your family is, to a large extent, determined by you! Because, while you can't  control the actions of the energy industry,  you can control what you and your family eat - and that could make all the difference in the world.
Posted by Sara Shannon at 5:21 PM 1 comment: 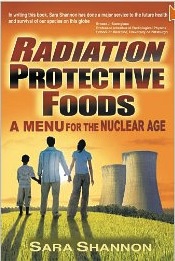 After months of research, the updated version of my book is finally available for all concerned about the accumulation of radiation in the environment. In the wake of Fukushima, we all need to be concerned. There are now 400 reactors worldwide and after 3 serious nuclear accidents, we need to rethink the technology. But, until we make this common-sense shift, we need to know and understand the measures we can take to protect ourselves and our loved ones. The intention of my book is to provide basic information on countering free-radicals, balancing ph, and utilizing specific radio-protective foods to counteract the damaging effects of accumulating low-levels of radiation.  Through this blog, each week, I will be posting information from my book that will be helpful toward protecting us all amidst our increasingly radioactive environment. Radiation Protective Foods can be purchased at Amazon and soon will be available for the ipad (will keep you posted).